I want to dedicate my first post to a machine that I’ve loved very much, even if it has given me lots of troubles and..well, it still does every time I dare to touch it!

Just starting from its name, things are pretty weird.. On its back panel there’s a metal label with Fender written on it, that looks suspiciously similar to my guitar amp one’s. Something never seen on a synth, before! :D

An other pretty strange thing, is the Portamento ON/OFF switch activated by the pedal, a useful but pretty unusual design.

When you try to rise it from its stands, it reminds you clearly the reason of its Rhodes name (yes, its complete name is Fender Rhodes Chroma Polaris, there should be an ARP too..)..it’s so heavy! Anyone aged enough to have toured with a vintage Rhodes electric piano, knows about the heavy weight and the sacrifice needed to carry it around, obviously having the mechanics of a real piano it’s heavy..but the Polaris is an electronic device! Opening my Polaris for the first time, I remember of having searched for the alleged lead bars, I imagined they had put by design, to increase the image of solidity of the product! :D

The Polaris is an analog/digital hyb 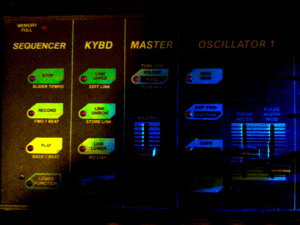 rid, where an analog CEM chips based, 2 oscillators/channel, 6 voices of polyphony, 24dB filter synth engine, is computer controlled by a 80186 microprocessor, giving amazing features for the beginning of the 80s standards.

The project was a cut down, cheaper version of the original Chroma synth developed by ARP, the company known to the public for the epic synthesizer present in “Close Encounters of the Third Kind“, too. It’s development suffered several problems as ARP closed and was absorbed by CBS, the owners of Fender Rhodes. The project started under Paul DeRocco and was almost completed when CBS decided to pass it to Rhodes, leaving the team with much less advertisements funds, in a moment when digital was surging as the new standard with the Yamaha DX7, Oberheim and Sequential Circuits were still at the top of the sales while Roland and  Korg were offering alternatives at lower prices (Juno 106, Poly 800). The Polaris hasn’t been commercially too successful, but was still a very good synth with a distinct character.

I should have get rid of it, when long time ago, it was officially diagnosed dead by my synth tech center. I sure overestimated my  qualities as repairer, even so what was really needed more then a tech, was a necromancer!

The most common fail on the Polaris is the connection from the front panel to the PCB. The plastic film that holds the tiny copper connections, tend to dry with the years and brake, making the editing possible only through MIDI.

Not a big problem today, as we have free MIDI editors and cheap programmable control surfaces that can solve the problem. But mine unfortunately was victim of a flooding and some drops of water entered in it, making it literally drowning. Its synth soul abandoned it, but its corpse started having a new life, reacting to MIDI inputs, but in the funniest way possible! From there its nickname, Zombie Polaris.

When the mood is cool and in full moon, it is capable of such dreadful howls!

6 thoughts on “A Zombie Chroma Polaris”

This site uses Akismet to reduce spam. Learn how your comment data is processed.