The MXR M-113 Digital Delay has been one of the most popular first generation audio delays, as it had a good quality but was more affordable than the previous processors. Introduced in ’76 at around 1000 USD, it was still expensive, but a lot less than the other digital delays available in the market.

MXR was specialized in guitar pedals, this delay was instead offered in a 19″ rack unit and, same as the other effects of the professional rack series, (Flanger/Doubler, Graphic EQ, Pitch Transposer) became very popular and used by famous artists such as David Gilmour, Frank Zappa, Roger Waters, Brian May and Mike Rutherford.

To contain costs, a modular architecture was chosen. Optional memory boards were inserted in slots, to increase the delay time, but these were pretty expensive, costing almost like a complete unit.

Digital noise..well not only that! :D

Unfortunately the M-113 Digital Delay, same as its collegues of the same period, is pretty noisy and not only referring to the actual standards. Apart digital noises always present, these processors have a marcated tendency to generate audio hum.

The Model 113, Digital Delay has a maximum bandwidth of 20KHz, but this decreases with longer delays, down to 2.5KHz. The longer the time between repetitions, the tighter the passing frequency band, being reduced through antialiasing filters (HPF and LPF) the more the delay time is increased. 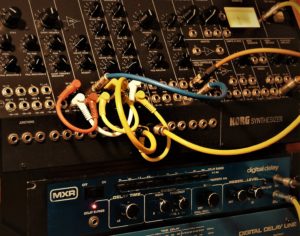 re several video examples already of this delay tested on guitar, I thought it could have been a good idea to try it, using some unusual but hopefully interesting sounds.
To record, I used a dbx DI box and the signal sent to a Universal Audio 610 tube preamp, even taking all possible counter-measures, still a bit of hum is audible.

On the examples below, I feeded as sound source, a sweep from the filters in feedback of an old Korg MS-50 synthesizer, some piano chords I had recorded from a real piano and a couple of seconds of an oldschool reggae classic.

I chose these piano chords I recorded as, having long decays, are ideal to test the effect of short repetitions, when modulated. The effects space from phasing to complete madness. The last one is a strong modulation at the higher band of frequency of the sweep, reminding the effect of a ring modulation.

On the following examples, let’s try something that really impressed me first time I played with a Powertran  (An article on it, is coming soon). On the MXR the feedback has a faster decay and there’s not the “freeze” function, but the effect it is interesting, too.  Once the delay is at tempo with a rhythmic pattern, having adjusted the decay time knob, all Delay Range buttons create a different version of the pattern, but on different speeds. Being the buttons based on a double time sequence, all these are compatible in tempo. Let’s experiment with a small classic reggae riddim loop:

Since ancient times, places destinated to public speech or shows, were chosen in base of their  acoustical characteristics. A powerful voice listened near a sharp rock wall, could impress the public and add a magic ingredient, like if forces of nature were happy to help the venue, amplifying the wanted message.

The Echo was so important, to have a dedicated character in Greek/Roman mythology:

Echo, a mountain nymph, was helping Jupiter in distracting his wife Hera, with interminable discussions, while the god was cheating on her with the other nymphs. Realizing the trick, Hera cursed Echo, removing her ability to speak. The only sounds she could emit, were the endings of words she could hear. As usual in ancient myths, the story ends in a tragedy, with Echo dead but not her beautiful repetitive voice, forced to live forever, but only in the most remote and inaccessible places.

Natural echo or reverb of special rock formations, or the reflecting shape of caverns, were used to create a dramatic effect on human speech, chants (and minds) for ritualistic or entertainment purposes.

The Art of Procrastination

Builders with time could, through architecture, recreate nature’s big spaces and the possibility to impress public with special effects, could  slowly move from remote areas to the cities.  Acoustically shaped amphitheaters and later, closed spaces like theatres and religious buildings were built for this function. Music started being played in dedicated “chambers” or “halls“, with reflecting walls and high ceilings, to obtain long reverberation times and decays.

At the beginning, recording studios used to record the space where musicians were playing, with microphones pointed to ceilings or walls, to capture the returning delayed sound and the signal was mixed to the original.

Later, rooms were dedicated exclusively to reverberation. A sound from the control room was sent to an amplifier in an empty room or chamber, completely empty and with reflective materials. One or more microphones were used to capture the effect, that was mixed to the rest of the sounds in the mixer. To add colour or to obtain special effects, metallic thin plates or springs, were recorded while resonating in the room, too.

At the end of the 50s, technology arrived to a point where the process of reverberation could be standardized and every major studio had a plate reverb like the EMT 140, or a DIY simpler version of it. The effect was obtained through the use of a big reflecting surface, in this case a metal foil put in tension through springs. A speaker inside the unit, puts the plate in resonation and a pickup captures the signal then amplified, through a tube preamp. There was a mechanical damper, to reduce the decay and later two pickups, placed in different places of the box, to obtain a stereo signal.

The effect is warm and beautiful, but unfortunately the technology needed big spaces as the plates were more than 1 meters long and these reverbs were very heavy and expensive.

A low quality delayed signal, could be obtained with the same process, implementing springs in tension, instead of plates. The idea, commercially developed by Laurens Hammond, the organ pioneer, was much less bulky then plates and even portable, to the point to become a standard on electric guitar amplifiers.

Spring reverbs give a particular vintage flavour to guitars, drums and percussive instruments, really great for old Funk or Reggae.

With the advance of technology, magnetic surfaces in the form of tapes (Echoplex) or disks/drums (Binson/Meazzi), were used to record and reproduce the delayed signal, on dedicated processors.

The tape loop has been the first form of reproducing a sound with a delay. Two tape recorders where used before dedicated machine were born, one to record and the other for the playback. Delay time increased, the furthest the second recorder was placed from the repro machine.

One of the most popular tape echo units, has been the Roland RE-201 Space Echo, still searched by Dub producers has pretty high values, today.  Its tape was left unrolled in a transparent compartment inside the box. Rising the top and watch the tape moving in an apparently chaotic way, listening to the smooth noise of it, while smelling the characteristic chemicals odour, remains a very unique experience.

Some special effects, obtained using tape echoes, were pretty popular in the 60s and 70s, especially for Sci-Fi and Dub. I recorded a few examples with my RE-201 with the “Intensity” (Feedback) at maximum, conditions under where the Space Echo starts auto-oscillating feeding its own noise. The effects obtained are warm and immediately bring back to the past. The first track, called RE-201 Slam, is obtained instead slapping the unit with force. The shock is captured by the internal spring reverb. The third track is dry at the beginning, while has some additional effects from the second part. Track 2 and 4 are sweeps, moving the “Repeat Rate” knob.

Many virtual tape delay plugins of today, are based on the RE-201 Space Echo, the most popular of the RE series 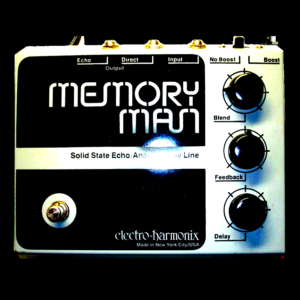 ucket-brigade device (BBD) is a discrete-time analogue delay line and that an analog delay line is a network of electrical components connected in cascade, where each individual element creates a time difference. A series of capacitors created the delay. Summing a big number of those, could create the desired long echo. Analog delays, cannot  reproduce the same sound for long, each repetition has a dirtier sound and this, with the eyes of those times, was seen as something to improve. They are very popular and still produced for guitarists.

Digital delays, can repeat the same sound, maintaining intact the quality of the original same as a sampler, only when sample rate and bit resolution are high enough.

The first commercial machines had a very low resolution, so samples were noisy and with a limited bandwidth. This is the characteristic that, in my point of view make them attractive and useful still today, when clean sound is no more a priority.

At the beginning, these machines, were only at the range of professional studios or rich producers. Until Electronic & Music Maker Magazine published a series of articles with schematic and instructions for a DIY delay, making affordable and available to a wider public this new technology.

Being a lover of Dub and vintage equipment, I’ve been lucky to own a few of the classic delay devices, bought when prices were extremely affordable, as nobody on those times needed a bulky and noisy delay only, machine.

Vintage delay lines have an other interesting aspect.

Their buttons select always multiples of the original tempo. If the delay is in sync with track tempo, pushing different switches, gives a today, very fashionable Beat Repeater effect, where for a example a loop is faster or slower, but always remaining in sync with the song. Some machines like the Powertran, had a freeze button, so that the sample was repeated without decaying, same as a sampler. 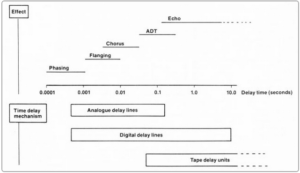 A Delay Line, is able to create a series of effects, not stricktly limited to repetitions of samples. Through the modulation of the processed signal and blend it to the original, a series of interesting effects are obtained, too.

When the same signal is combined with its delayed copy, it’s like having passed it through a filter. The Comb Filter resulting from counter phasing if modulated, changing the delay time through a Low frequency oscillator (LFO), becomes the pleasant effect called Phasing.

Same as Phasing, but with longer delay (10ms). Similar to chorus, but a more dramatic effect and with a marked SciFi like, character.

Even more delay and slow modulation, possibly with dry and wet signals on the opposite sides of the stereo field, gives the classic chorus effect that doesn’t need too many words more.

Automatic Double Tracking, was pretty popular in the 80s. Time delay is kept just below the perception of the single repetitions and is used especially on vocals, to give the illusion of doubling, without the need of recording two different voices.

On the next posts, we will test drive, three of the oldschool digital delays still in my hands:
MXR Digital Delay, Powertran Digital Delay Line and the Roland SDE-3000